Our Place/The Insanity of Mary Girard

The unassuming location of a dock extending out onto a small lake serves as the backdrop for five different stories. On a cool autumn night, Jake arrives with Holly at a secluded spot. The couple feels an immediate connection to this place as if it were put there just for them. Things seem perfect until Anne and her date, Lyle, arrive. On another day, early in the morning, Beth has plans to spend the day with her dad at their favorite fishing place. She has high hopes for catching some sunshine, a few fish, and her dad's fading memories. The third story involves Al, who arrives at the dock with his family and has high expectations for their family canoe trip. The only problem is that his wife would rather stay inside, one daughter has a chip on her shoulder, and their younger daughter is really weird. In the fourth story, Cory and Liberty are having a picnic lunch out by the lake, but a realization about tuna-fish sandwiches sends a shock wave through their relationship and brings about questions of who they are and what lies ahead for them. In the fifth story, Stanley escapes the hardships of his life to blow off some steam on the dock when Sidney, his 6-year-old sister, arrives. All he wants is for her to go away, but she insists on staying with him. The entire ensemble gathers on the dock together for the final scene. In a poetic epilogue, they all discover the true meaning of Our Place—both comedic and tragic.

The Insanity of Mary Girard

In 1790, Mary Girard is committed to an asylum. After Mary became pregnant by another man, her husband had her declared legally insane. Now, Mary sits in a chair as the "furies" dance around and impersonate people from her past. By the end of this haunting and highly theatrical piece, she has grown rather convincingly into her diagnosis.

Please note: Due to mature and intense subject matter, these shows are recommended for ages 12 and above. These shows touch on the following topics, which may not be appropriate for young children, or people sensitive about any of these topics. Our Place: In one scene, a man is depicted with advanced Alzheimer’s disease. In another, a character’s younger sister drowns. The Insanity of Mary Girard: It is stated that a woman became pregnant by a man who is not her husband. The same woman is depicted gradually descending into insanity. 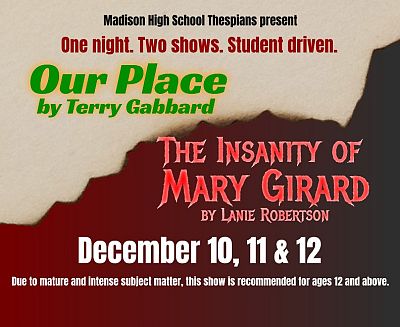